The Key and I

Don’t have the key to happiness or peace or prosperity. But I do have the key to my daughter’s car that I had lost–the key–not the car. Here is a case where “Use it or lose it!” isn’t quite accurate. I used it–drove the car around town ever so slightly with her out of the country. Just doing my job. Haven’t trashed it with my typical car interior ickiness. I use the key that isn’t on a ring with other keys, so given that the car is out front here, I must have had the key when we–the key and I–arrived home one afternoon. Since this car key isn’t attached to my house key, I didn’t need it to open the house door, so when I realized I couldn’t find the car key a day or two later, it wasn’t in the usual spot for missing keys–the door.

I looked in every jacket pocket I could think of, on every counter, in drawers it could have fallen into. Nope. Then I put it out of my mind–sort of–and let it stew. That didn’t improve the flavor as it just made me crankier about the state of the house when it became clear this wasn’t an easy find. I drove the car again the other day, hoping it would jog my memory when I arrived home again. In its way I think it did. I half-remembered that when I had pulled into the driveway, my son was here and so I didn’t need any key to get in the house. Had I left it on the brick out front to pick up a rake or a weeder? Had it fallen into the pachysandra? Had it fallen into bags of paper to be recycled? So many possibilities. I stopped caring consciously and went to bed. I dreamed/worried about it. When I woke up, I went through my clothes on the chair in my room. Then I opened a drawer and reached into the pocket of a sweatshirt/jacket that I rarely wear and there was the key. Joy throughout the land! 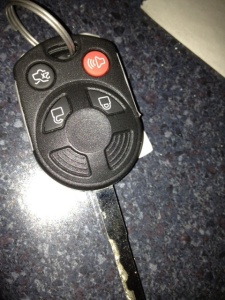 I used it and lost it...and found it.

It is sad how happy that made me. I hadn’t prayed to any saint I don’t believe in–more likely I’d cussed at myself–but it sure felt as if someone had taken pity on me and put the key in that pocket exactly when I needed it to be there. Have I told you about the passport that went missing the day before it was needed, only to appear in a bowl in a cabinet? It wasn’t miraculous at all–completely logical explanation for how it got there. I’m not sure it’s proof of my logical tendencies that I’m the one who found it by half-assedly remembering how stupid I was to cram random things in an overstuffed drawer the day of a holiday party, so that some of the items were pushed back behind and fell into the cabinet below. Misplacing rubber bands– not so stressful though. Somehow I’ve come to expect these convoluted movements of stuff I can’t keep track of. My dear husband routinely forgets to turn off the oven. I can see  into our 80s pretty clearly. If we can find our way clear to get there from here.