Something is Always Happening 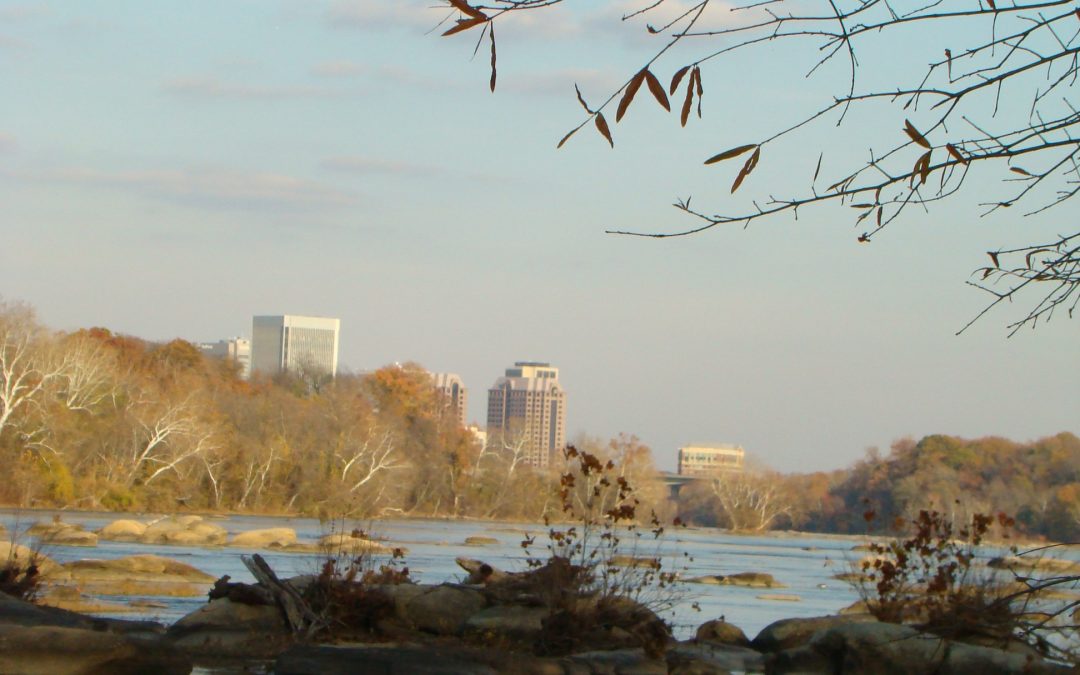 I gave a 5 minute talk last night at Midlothian Middle School to middle schoolers, their parents, teachers, and other book-loving folks, sharing the stage with much better known and accomplished writers Sheila P. Moses, Sue Corbett, Brooks Smith, Connie Lapallo, and Gigi Amateau. It was a most pleasant way to spend an evening, full of stories and inspiration. Look these other folks up and buy their books at your local bookstere. You won’t be disappointed.

I focused on the part of writing where I’m not stuck with the seat of my pants in a chair. Made me think I need to take my own advice! Here’s more or less what I said. Those Midlo folks are chomping at the bit to come into Richmond and take advantage of what it has to offer. That’s exciting to me.

Not me ziplining across the river (which would be cool, but isn’t possible yet!), but a WIld in the City guest ziplining across Belle Isle Quarry. I had the pleasure of that trip another time.

I’m doing a couple of things this week that might rattle some nerves—public speaking and rappelling down a 25 storey building downtown as part of Over the Edge, a Special Olympics extreme fundraiser.  I’m doing both of those heart-pounding things this week because I’m a writer. And I feel very lucky to be doing both.

Chester Filbert in Nothing Ever Happens on My Block—one of my all-time favorite picture books– has a perpetual sneer on his face. I’ve been known to have that look, but there’s a big difference between me and Chester Filbert—he doesn’t see what’s all around him—he can’t get outside of his head—of his preconceived notions of how dull his life and his neighborhood is.

Chester says longingly, “Some places have marching bands or haunted houses, courageous hunters hunting, ferocious lions and tigers, pirates and buried treasure…” on and on..  He’s so busy wishing for what he doesn’t have that he misses what is going on right in front of his face.  Disgusted with his lot in life,  he finishes  with “But nothing ever happens on my block., and snarls, “When I grow up, I’m going to move.”

It’s easy to think our lives are dull and boring and for some stretches they are, but here’s the thing. Something is happening on everyone’s block—you have to be out there and be open to seeing it.  To be an effective writer, I need to spend some time stuck inside my head for sure—contemplating, questioning, revising, but I NEED to get outside my head and my house even more—meet people, ride horses, ask questions, rappel, go rafting, try new things, look at art, eat at cool restaurants, explore what’s around. All that feeds my writing and my life.

When I wrote Insiders’ Guide to Richmond, I was well aware that many people say nothing ever happens in Richmond a la Chester Filbert. It’s not D.C. or New York or Chicago.  It’s stuck in the past, dull and boring. Who would ever want to visit? There’s nothing to do! I’ve heard it all. And I don’t believe it!

So I drew on my experiences living here 19 years, being an outdoorsy, involved, art and history-loving, quirky and curious type and wrote an upbeat book that makes it easier to find the good stuff in our city and region.

WIth apologies to Ellen Raskin:

Some places have a free and fantastic Folk Festival along the river, –did you go?! Class IV and V whitewater you can raft through downtown, one of the 50 most beautiful buildings in the country, awesome mountain biking and multi-use trails. Some places have torchlit walks on a Slave Trail, and herons roosting along the Pipeline, a Final 4 basketball team, artsy and involved universities, a Native American village to visit, bald eagles soaring above  the James, one of the best art museums in the country that’s open every day and free!!! And will be full of MUMMIES next month, a creepy crypt under a historic church, sites related to revolutionaries you’ve heard of:  Patrick Henry and GW and  Thomas Jefferson, and sites related to ones you might not have: Gabriel, Maggie Walker, John Mitchell, John Jasper. Some places have a one night internationally-curated light exhibit INLIGHT this Friday night at Tredegar!!!!  NASCAR, recreational tree-climbing, even Mid-lothian Mines Park where 9 year olds once worked down in the shafts doing the dirty work  And that place is Richmond. (And I could go on. For another 300 pages, but I won’t! I didn’t even mention that war you might have heard about….)

Chester Filbert said “When I grow up, I’m going to move.” Once again poor Chester has it all wrong!.  Don’t wait till you grow up to move. Move NOW!  Don’t worry–I don’t want you to move away from home or away from Richmond! I mean MOVE! Don’t stay in one place! Don’t say there’s nothing to do or sit staring at computer or television screens. Get out on your block in your neighborhood, in the city and the region and be active and involved, observe and experience. Think outside the block! Be a part of the world—not apart from it.  Be a part of Richmond–not apart from it.  And if you’re in Shockoe Slip Thursday around 3:45, look up at the SunTrust building and wave!  That’s where I’ll be hanging out.

Hope to see you around town!

After signing a bunch of books and talking to the people at the event, I know I will see them around town.

Putting it out there — would love to hear and see @DollyParton and @Adele duet almost anything. #doit

One of my books has been removed from the shelves in some Florida school districts. Those of us who believe in books for and about ALL kids, remember this: There are more of us. WAY more.

Keep fighting.
We will prevail.