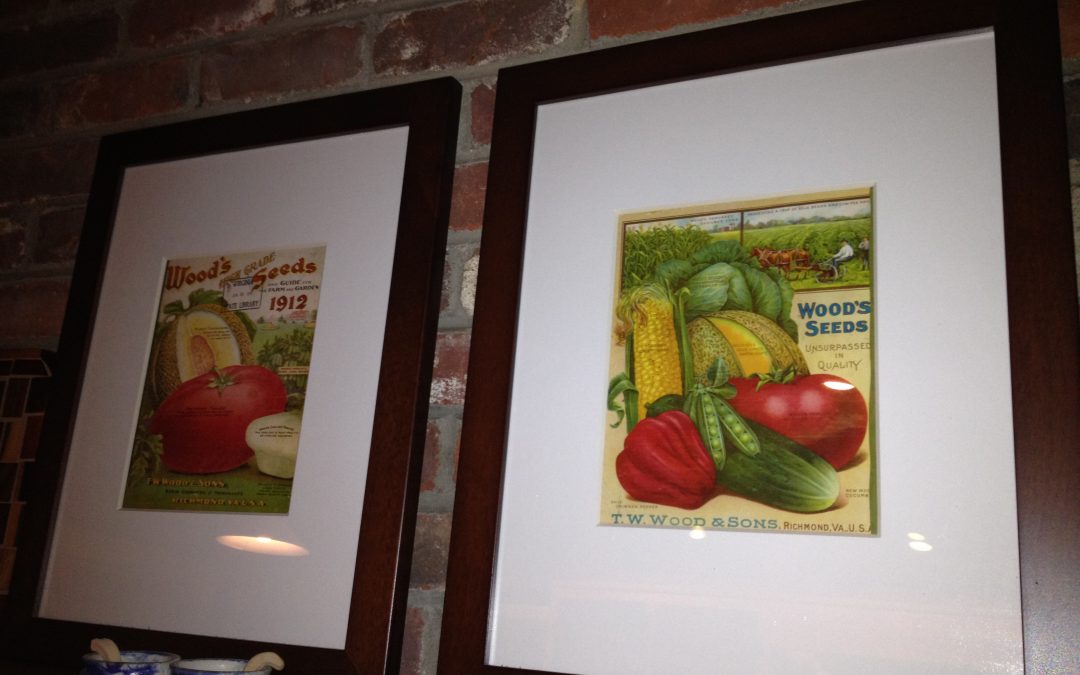 Maybe it was the Luna Bar breakfast or the realization that for the next 8 hours all I would eat was trail mix, gummy bears and Famous Amos cookies and a banana, but I had food on the brain while my butt was on a bike as I was riding the 102 mile inaugural Tour of Richmond on Saturday. The event started at RIR, where for years the State Fair of VA used to be, so I was reminded of the first and last fried pickle I ever consumed just as we were getting underway at 7 a.m. Then we rode down into Shockoe Valley, alongside the Cannon Creek Greenway bicycle path for a bit and into old timer industrial part of Richmond and there was an old building denoting T. H. Wood seed purveyor from way back which I recognized from the prints in my kitchen from the Library of Virginia gift shop.

I got mine at the Library of Virginia gift shop.

Then it was onto and through the 17th St. Farmers’ Market–where I first tasted the Holy Grail of goat cheese…back when it was a decent farmers’ market and where now some spots like Tio Pablo, LuLu’s, Arcadia, C’est Le Vin, Halligan BBQ and more are doing their part to add spice to this area. And of course, just around the corner, Julep’s is still bringing  the southern-inspired fine dining in the oldest commercial building in Richmond.

Then we crossed the river on the Manchester Bridge. I didn’t see any sturgeon, but I know they’re there. Richmond wouldn’t be Richmond without the river and the fish that frequented it when the Powhatan Indians were running the show here.

Along Riverside Drive I know there were some Paw Paws (GW’s favorite fruit), but truth be told they’ve dropped by now. Then out to Chesterfield County where I think it’s funny that the restaurants that are actually just over the line in Powhatan (Wild Ginger and Mediterraneo) say they’re in Chesterfield so people don’t think they’re too far out in the boonies. As soon as we crossed into Powhatan County, farms started to pop up: horses, cows, Fine Creek Vineyard, a sign for Manakintowne Specialty Growers–whose salad fixings and herbs wind up in some of the finest Richmond restaurants and in anyone’s kitchen if you pick them up at a farmers’ market or through Fall Line Farms, a co-op I belong to. Then we zoomed by some guys putting out signs before 9 a.m. to sell fresh eggs and pastured meat. You need to be careful about buying eggs, though–especially on the internet–some eggs are too fresh. I can’t seem to remember the name of their farm, but it started with an A. Too many things rush by on a bike to remember every durned letter of the alphabet in the correct order.  Noticed Bourbon Lane  and a tavern along the rode from 1755 and a sign noting the last place Robert E. Lee camped on his way back from Appomattox to Richmond post-surrender. (His starving men were given rations by Federal troops, so that’s how this snuck into a food heritage bit.)

At our third rest stop, the friendly Powhatan folk were promoting the Powhatan Festival of the Grape coming up Oct. 20th. Unfortunately the coolers they had still offered only water or Powerade, so that was the old bait-and-switch. Soon after we crossed the river again and were in lovely Goochland County, home to many a good farm. Further east in Goochland on Tuckahoe Plantation is where I saw my first pastured beef cattle running, yes, running in the woods. And yes, I say “my” with partly a good reason as we did purchase a 1/4 of one from Daniel and Emily of Tuckahoe Lamb & Cattle and continue to buy their beef, lamb and eggs at farmers’ markets around town.

Winding our way along the route, we wound up in a gorgeous stretch of Louisa County for a bit, which reminds me of my visits to Twin Oaks, when I wrote a piece about the tofu and hammock-producing commune in Louisa. Sadly, no hammock time on this route for us. We passed more fields and forests not yet turned into sub-divisions and not soon enough exactly, but eventually we were in Hanover County and coming back toward civilization, by which I mean Q Barbecue at the finish party at RIR.