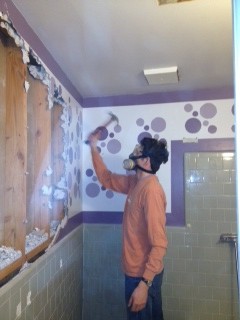 Some kids break bad. I don’t mean to brag, but mine break good.

This same gentleman tore off paneling in another room one year he was in high school, inspired partly by a class on architecture. I guess he’s a little bored now, which works for me. And how handy that this little project that I’ve had little to do with other than breathe in lots of dust will provide fodder for a couple of more columns in RHome. And yes, those non-existent purple polka dots were my idea, several Super Bowl Sundays ago, in cahoots with my daughter. The stencil sizes were inspired by a piece of cardboard leftover from a box from some other project–think it held light fixture parts and it was a done deal. Or so I thought. Turns out there’s never a done deal around here….