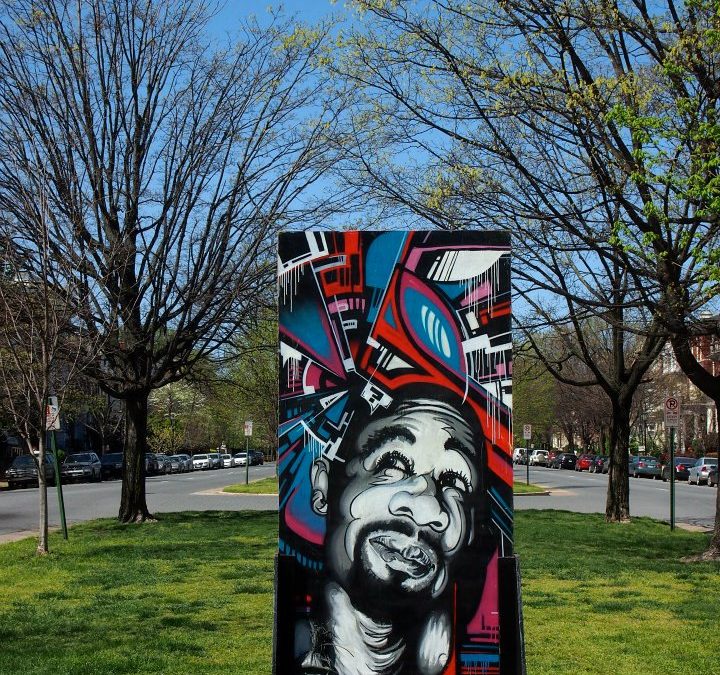 Monument Avenue is back in the news–for the always exciting Ukrop’s 10k (presented by Martins) this past Saturday that featured 80, 000+ feet going forward on 40,000+ competitors–and possibly 1 giant step backward if Art 180’s legally permitted exhibit What Do You Stand For? is bullied off the block by April 6th instead of being allowed to stay through May 4th as agreed to originally. Apparently complaints from a few well-placed Monument Avenue residents, one of whom called Art 180’s vibrant and colorful and moving exhibit disgraceful, have triggered a revocation of their permit. Wow. That guy can’t see the grace in this exhibit for the dis in his own eye.

Monument Avenue has gorgeous architecture along it–including the amazing Branch House, The Virginia Center for Architecture–a wide median with trees, and those durned statues. Those statues are symbols of  a Richmond set in its way, stuck in the past, standing still, looking backward, clinging to an unjust past. I much prefer an avenue with actual people and dogs out there walking and running, doing a yoga flash mob, painting plein air, being enlightened and inspired by the art and words of these young artists. This exhibit,exquisitely well-timed to include the Monument Ave 10k and Easter on Parade, gives the artists taught by Art 180 staff the chance to have their powerful, vibrant, and meaningful art showcased for thousands of people. This is where the new Richmond–artful, creative, vibrant, all-embracing–is on display.

Can you say juxtaposition?

From a Close Up on Monument Ave. on p. 159 in Insiders’ Guide to Richmond–written by yours truly:

“And then there are those six statues, of Robert E. Lee, Stonewall Jackson, J.E. B. Stuart, Jefferson Davis, Matthew Fontaine Maury, and Arthur Ashe. What started as a way to memorialize the Confederate past while jump-starting development to the west of town  in the late 19th and early 20th centuries took on a life of its own, mythologizing the Lost Cause. For the record, the vast majority of people in and around Richmond do not venerate those dead Confederate guys. We mostly joke about them or ignore them and the no left turn signs at some of their intersections. It is no joke that they represent a painful past that Richmond and the rest of the country is still coming to grips with. They do add focal points and drama to the avenue, and sometimes even a protest or two. In 1968, Helen Marie Taylor took a stand against a paving machine that would have covered the original Belgian blocks on the road. She jump-started the movement to preserve and protect the Avenue’s unique character.”

Protests and advocacy got Arthur Ashe’s statue added in 1996. Tuesday evening at 7 p.m. there’s an art walk scheduled to start at the Lee Monument to celebrate Art 180’s exhibit.

It’s an exciting, art-filled time in Richmond with the G40 murals going up downtown now, the Street Festival mural project coming up April 12-14th and What Do You Stand For? in the middle of Monument Ave. I stand for it staying and for more creative and all-embracing uses of Monument Ave. to make it a place that celebrates all Richmonders. That’s a cause worth fighting for.